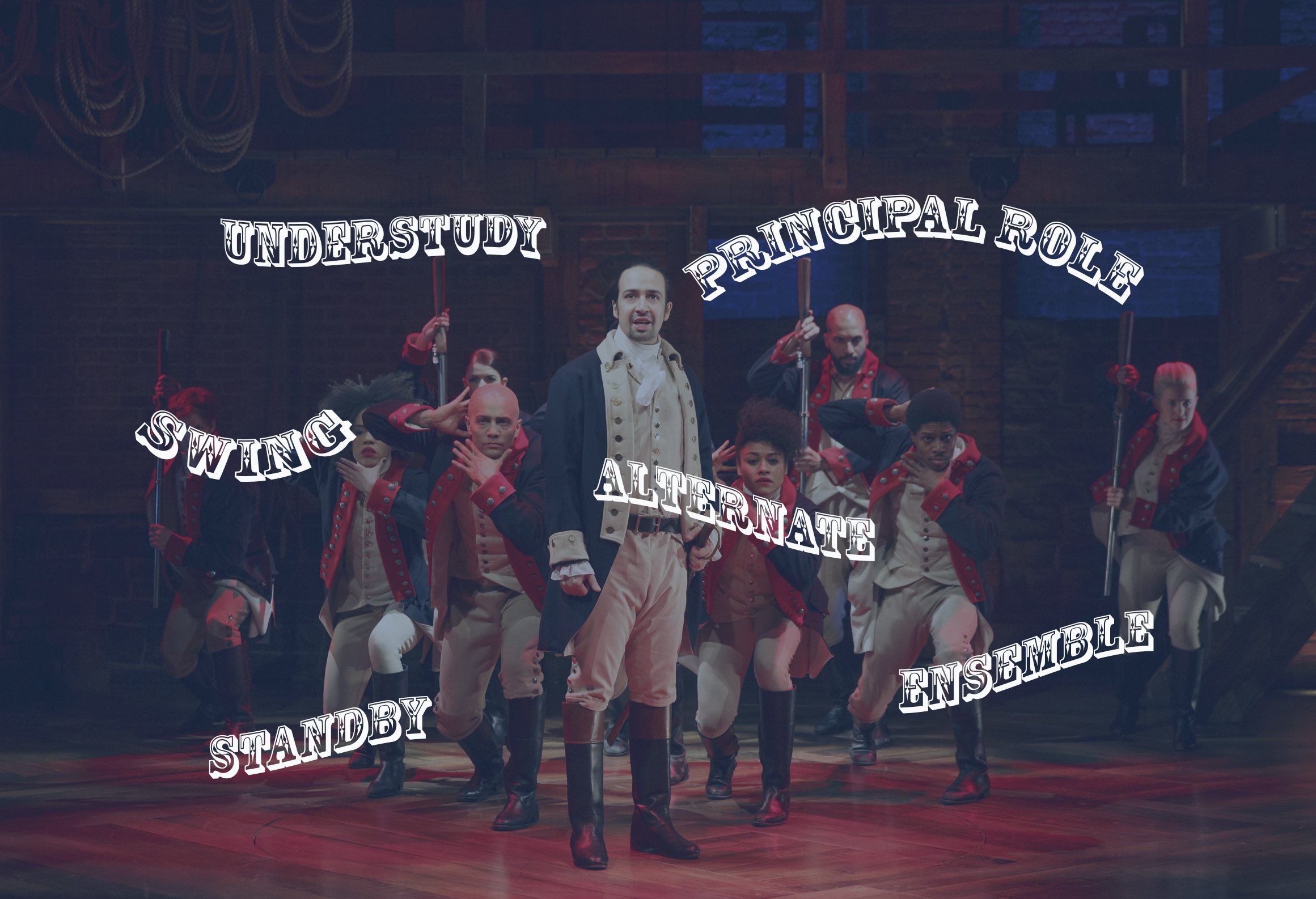 Have you ever opened a playbill or program book and see some actors have four different roles? Or wondered why three people are playing the same roles? Wonder no longer! I will explain exactly to you what each role entails AND how a cast is put together!

Go watch the video below and find out what the different roles are and how they fit together to create a cast! I’m taking Hamilton (with the original cast) as an example, so look up a few clips on YouTube or watch it on Disney+ if you haven’t seen it yet. I know it’s an recording, but it’s a stage recording.

If you have a good idea what Hamilton is about, let’s go on. In this blog you will learn about:

You don’t have time to watch the video? Or are you secretly reading this behind your work desk? No worries, scroll down and you can read on.

Also, just to mention it. As we’ll be discussing the recording of Hamilton and you want to know more how that’s done, you can read an article about it here.

Alright. Let’s start with the explaining! Before I’m going to delve into the different roles, it’s important to discuss tracks. A musical exists of tracks and we need to know what those are before we can go to the roles. No, not music tracks! Actor tracks! Every track is played by one actor or actress. The musical Hamilton has 21 tracks. This means that 21 cast members are playing a track during the musical. But one track does not mean playing only one role.

It’s about what one actor or actress does during one performance. So the actor playing Hamilton is Hamilton the entire play. That’s one track. But Daveed Diggs plays both Marquis de Lafayette and Thomas Jefferson in the musical and he can do that because they are never simultaneously on stage. So what Daveed Diggs plays is also one track, which exists of two roles.

But also the ensemble members each have their track. Each member knows exactly what to do, where to stand and what or who to portray. They have their fixed places. Their entire performance during the show is also one track. If another actor steps in for the main actor, he will play the same track as the other would have done.

I think this type of role is the most obvious one. A principal role is a role that has a spotlight on it. This role is often seen on stage for multiple scenes, has its own lyrics and/or songs, and plays an essential part in the musical. Without this role, the story could not be played. Can you imagine what would happen if there was no actor on stage playing Hamilton?

In the musical Hamilton, 10 tracks of the 21 are main roles. Both Linn-Manuel Miranda and Daveed Diggs have a principal role, but also for example the three Schuyler sisters and King George.

Ensemble members fill in the remaining 11 tracks in the musical. These roles are important as they often stage a setting, give depth to a scene or create a certain vibe by filling the stage. Ensemble members are the ones who dance in the background. They play the residents in a city setting. I think you get the point. They often work in groups and can have a different character in each scene.

In Hamilton, all ensemble members have some part to play. The most famous is probably ‘The Bullet’. The background of The Bullet, played by Ariana DeBose in the original Broadway cast, only became publicly known when Hamilton was put on Disney+. She is the bullet, representing death, which will kill Hamilton in the end and others along the way. She is there when Hamilton gets shot at or when John Laurens dies. But most of the time, she is just a cast member, blending in with the others.

Remember those 21 tracks that need to be filled? They need to be filled every evening. But actors get sick, go on a holiday or get injured. This is when standbys and understudies step in. Let’s start with the standbys.

Standbys are people who are literally standing by during performances. They are there for the main roles, although not all of them. Some main roles carry more risk than others, like difficult dances or playing with heights. If something happens during a performance and the actor can’t do on anymore, the standby steps in and will take over. So he or she is off-stage during the performance and will only step into the stage lights when the main actor is unavailable.

In Hamilton, there is one standby who can step in for all three Schuyler sisters. So the standby has to know three different tracks.

An understudy is similar to a standby as he or she also steps in for the main actor, but they are already on stage. In the first place, the actor is an ensemble member, who also has an understudy role.

So an understudy is already on stage every evening, but he or she will change track to play a principal role. For example, Hamilton is originally played by Lin-Manuel. But if he is unavailable, one of his understudies Javier Munõz and Jon Rua will play Hamilton. Most principal roles have two understudies, as one actor can go on a holiday and the second actor can be sick. The performance can’t go on without the principal role, so they need to have a back-up.

Just like with the main roles, ensemble members sometimes need a holiday break and get sick. Or they change their track and play a main role. This leaves an empty spot in the ensemble. To fill those up, a cast has swings. Swings are people who are off-stage and step in the moment a spot in the ensemble needs to be filled.

This role is often interesting for the actors and actresses, as they most likely have to know every ensemble track. So all 11 in Hamilton! Some ensemble roles have specifics, like gender, skin colour or age. In that case, there can be a swing who does only one particular ensemble track. Usually, they have to know all tracks or most of them.

On Broadway, swings can also be used between different musicals. Sometimes productions share them as swings can be used for one performance if they are not necessary for the other. In other places and certainly in touring productions, swings are there just for that one production.

Then we have the matter of an alternate, if it isn’t confusing enough yet. Not all musicals have alternates. Actually, most musicals don’t have them. You will only need them if a main role track is very hard on the actor or if the actor has a second job. Sometimes, the alternate is also an understudy as is the case with Hamilton.

An alternate is someone who shares a track with someone, but only for certain shows. So if Hamilton is playing 8 times a week, Linn-Manuel Miranda will play the show five times and his alternate Javier Munõz the other three.

This way the main actor can give his voice and body a bit of rest. If the risk of physical damage is too big by playing eight times a week, usually there’s an alternate. I’ve also seen musicals with alternates due to the main actress being famous and having to appear every Friday evening on the television.

Then last but not least: the dance captain. This is a bit of an odd position as has little to do with what the person is doing on stage, but it is a very important one. The dance captain makes sure that the dance level stays on top during the production of the show.

When a show is in pre-production, the choreographer will teach everybody their track. Once the show has opened, the choreographer will leave and it’s up to the dance captain to maintain the level from the beginning. You can imagine that with 8 shows a week, people start slacking a little bit. Or new members have to learn the moves when there is a cast change. This is when the dance captain steps in and put in rehearsals to go through certain dances. This way you will always see the highest dance level possible.

After reading all these different roles, you can imagine it’s difficult to create a cast. You have to figure out who in the ensemble fits what main role as an understudy position. And the cast can only be so many people (otherwise the production will get too expensive), so you will need to fill all places with just a certain amount. It’s a puzzle.

PS. if you think about auditioning, read my tips from my side of the audition table here!

Casting: choosing the best skilled or the most popular?